Dr. Howard Stein was a magnificent man, mentor, friend and professor. His lifelong mission for teaching moral learning touched every student and faculty member he met over the horizon of his 90 years of joy. Howard died in 2012, but he lives on through us all in the lessons we learned at his knee. This special tribute to Dr. Stein is but one way -- nay, the first way -- we plan to honor his intricate legacy and continue to celebrate the transparent morality of his life.

This “Boles Books Tribute to Howard Stein, Volume 1 (1948-2013)” is a unique compendium of articles written by, inspired by, and honoring the great and immortal Columbia University in the City of New York teacher Dr. Howard Stein -- who was born on the Fourth of July and died on October 14, 2012 at the righteous age of 90.

Some of these articles appeared in a different form in the Boles Blogs Network and other pieces partially appeared in Go Inside Magazine -- where Howard was a founding Editor -- and still other bits of dreaming were first sowed in the Urban Semiotic community of thoughts.

We have taken all of those external works and combined them here in a single, redacted, value-added, context to celebrate the life of our mentor, and friend, in this exclusive Kindle Direct Publishing special edition anchoring in at over 28,000 words and 75 standard typewritten pages. There is new content in this volume of work that has never before appeared anywhere else!

Howard fully support this ongoing effort while he was alive, and he provided the full use of his writing in any capacity, in perpetuity, to “keep the word alive” -- for profit or not -- and this tribute is a full vesting of that lifelong, dying, covenant.

This tribute starts in 1948 and finishes, for now, in 2013. That 65 year span can only begin to attempt to memorialize the full arc of Howard Stein’s bright life streaming across a darkening sky. We start with Volume 1. If you have something you’d like to contribute to this effort, or if you, too, have in perpetuity publishing rights to Howard Stein’s work, please visit the BolesBooks.com website and get in touch to help us even better remember the man who helped define grand generations of thought and moral composition.

Howard Stein and David W. Boles met in the early 1980’s, and their three decade friendship was the rock from which Boles Books Writing & Publishing sprang, as well as the creation of the United Stage, the invention of Go Inside Magazine and the fulsome propagation of the Boles Blogs Network. Never before was there a more important, or historic, relationship that helped define, and found, the cornerstones of early public interest internet publishing. Howard Stein was a web publication pioneer, and the embers of that hot, burning, legacy shall neither be dimmed nor forsaken. 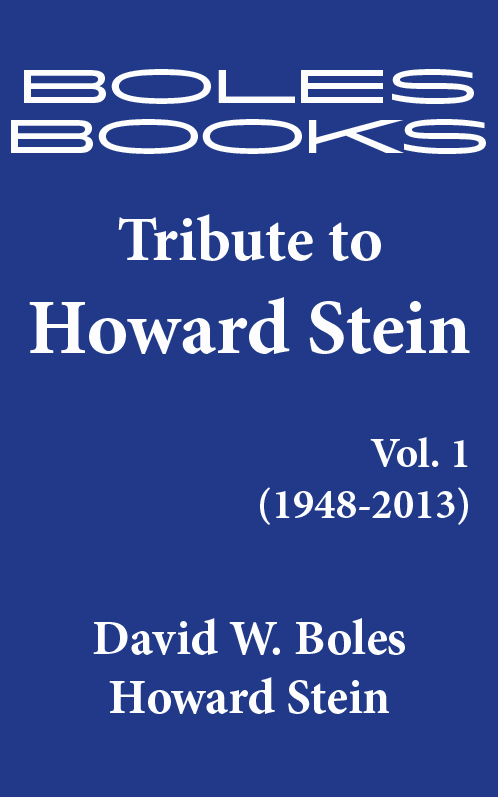